In early July of 2012, life was different. Marissa Mayer had not yet been appointed CEO of Yahoo. The US House of Representatives had only voted 32 times to defund the Affordable Care Act. Amtrak’s downeaster train service was about to break its annual ridership record. And I was not yet married to my wonderful wife.

But sadly, my iPhone 4 decided it didn’t want to charge its battery anymore, so while I was able to do a final over-the-air backup, it slowly ran out of power and went to sleep. Being the pack rat I am, I did not get rid of it but held onto it in the hopes that some day I would fix it.

THAT DAY HAS COME! I ordered a replacement dock connector cable and installed it this morning. After a few minutes with a friendly charger, my trusty iPhone 4 woke from its long 16 month nap, slightly confused.

I thought it would be interesting to compare a snapshot of where I was with my iPhone nearly a year and a half ago to where I am today. So I present to you 16 month old iPhone screenshot with today’s! 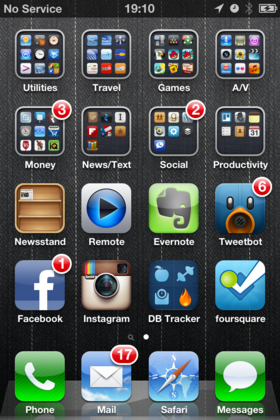 I was quite surprised by the changes. Clearly there is the difference between iOS 5.1.1 and iOS 7.0.4, which to me is shown by the brightness of most of the icons but also in my choice of background image. My current one is from the great photographer John Carey at Fifty Foot Shadows who published a set of images specifically designed to take advantage of the parallax effect in iOS 7.

There is also a clear change in the way I manage and use apps on my phone. I used to obsessively keep everything I used on a single home screen forcing me to use folders. Since then, I have given up using folders on my main screen (they now reside on a second screen to the right) which allows me to have the apps I use most within a single tap.

My app choices are still similar with a focus on location based items and social media. It is quite fun to have an app that Tiffany I wrote, Amiko, on my home screen. I also have embraced podcasts to a much larger extent and have moved beyond Apple’s built-in app to start using Pocket Casts (although I am eagerly awaiting Marco Arment’s new app, Overcast).

Apps which have fallen by the wayside

So I hope you have enjoyed my trip down memory lane. Soon enough I will update my old phone and it will go into service as my car iPhone (replacing my iPhone 3G which is currently serving that purpose).