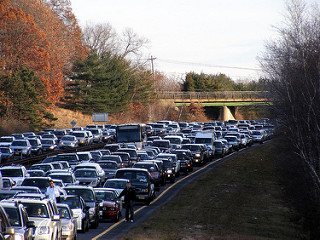 In my very occasional series of posts where I give ideas for PhD thesis topics (see the all time hit the students are fighting over, Fractal dimension as measurement of quality) I give you another path to your doctorate. That is if you are in the Operations Research field. Sorry biologists.

I am sure we all have wondered at the situation where you are driving along the interstate and then all of a sudden there is a traffic buildup. You expect that there must be an accident or some event that is causing it, but then, just like it started, it suddenly clears up with no evidence of why it was there. A number of years ago, I remember coming across an article that showed that congestion behaved like a wave (where the height of the wave is the density of the cars). These waves can move through the stream of traffic and long outlive the original cause of their creation. I can’t find the original article, but there has been quite a lot of reasearch in the area. See Density waves in traffic flow for an example.

This morning’s drive into work posed another question in a related light. As I pulled up to the light at the entrance to 199, I had a James City County Police officer in front of me. As we entered the highway, there were not nearly enough cars to prevent free flowing traffic, but we instead stayed all bunched up. Unlike non-law enforcement vehicles, which people are happy to move around and pass to spread out on the road, a police car introduces certain mental restrictions which prevent people from behaving how they naturally would. We are uncomfortable passing a police officer or driving very much faster at all even if we are past the point in the road where the police car is located. This results in a “blob” of traffic that is all stuck together that would not exist otherwise.

So, my topic for a budding Operations Research student is this. How do you model a traffic scenario where certain vehicles introduce more stringent constraints on the vehicles around them that are not purely limited to their physical place on the road?

Go on, you can thank me later.

Update: There is a good comment thread starting over at Hacker News here talking about how this could be used in traffic management. Interesting.