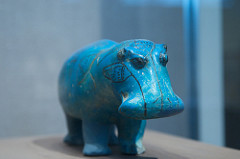 I love museums. From a very young age my parents brought me to museums and I have very fond (if vague) memories of visiting the Peabody Museum of Natural History staring up at huge dinosaur skeletons. Being close enough to New York, I was really luck to have the American Museum of Natural History, the Bronx Zoo, the Metropolitan Museum of Art, the Museum of Modern Art to name just a few. I remember my awe and fascination with all things dinosaurs, the ancient temple rebuilt inside the MET, mummies, medieval arms and armory. I credit much of my personal curiosity about the world and science to being exposed to museums as a child.

The adventure didn’t stop as a I grew up. Moving to Virginia and Williamsburg in specific gave me access to a whole new range of museums; heck, I live almost inside one of the largest living museums in the United States, Colonial Williamsburg. Being 3 hours away from the wonders that are all the Smithsonian museums is a blessing.

Most recently Tiffany and I got to visit the Isabella Stewart Gardner Museum in Boston with our friends Doug and Elif. A strange museum filled with wonders from all over the world captured as a moment in time through the will of the owner which prevents the museum from changing the layout or contents of the museum.

However, while going through the Gardner museum I thought “This couldn’t be constructed today.” There is no way the world would allow a single individual to collect these artifacts into one place. I realized that many if not most of the museums that I love and would never want to give up could not exist if not through the theft and pillaging of countries all around the world during the 20th century. The modern application of scientific rigor and cultural sensitivity and ownership to the historical record of countries around the world is absolutely the right way to do things. Stealing artifacts from other (usually poorer) countries to be displayed in the museums of the rich countries is really bad karma. Taking artifacts out of their historical environment destroys much of the value that can be gathered from the historical context. (See the recent controversy over the show American Diggers.)

But I am finding it hard to square the love I have for the classic museums of my childhood which are clearly full of items that have been removed from their places of origins in “less than ideal” circumstances with the great experiences I associate with those museums. I remember going through a section of the American Museum of Natural History full of Chinese artifacts and looking at the placards showing they had all been added to the museum in the 1920’s knowing that they had almost certainly been smuggled out of their home countries.

I have confidence modern scientists can bridge this divide but I hope that the modern designers of museums can maintain the atmosphere of wonder that an 8 year old kid can get from seeing such a broad array of artifacts from all over the world without having to travel all over the world to see them.