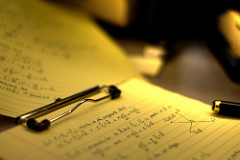 Bernard of Chartres used to say that we are like dwarfs on the shoulders of giants, so that we can see more than they, and things at a greater distance, not by virtue of any sharpness of sight on our part, or any physical distinction, but because we are carried high and raised up by their giant size. The sentiment of this quote, attributed to Bernard of Chartres by John of Salisbury is probably familiar to most people and almost certainly taken for granted as being true. The rise of modern society and learning, whether it is technology, science, or cultural understanding is founded on this principle; that each scientist does not have to “reinvent the wheel” before they can discover something new.

But in a great conversation I had with Terry Brock a few weeks ago, I noticed a difference in how literally this sentiment can be applied to different disciplines. We both attended a colloquium talk given by William and Mary physics professor Marc Sher (who was my freshman adviser) on the topic of the Higgs Boson. By way of background, I have a BS in Physics and Terry is working on his PhD in Anthropology. While this would imply I was better prepared for this talk, Terry is the son of Chip Brock, Distinguished Professor of Physics at Michigan State University, so I think Terry gets extra physics points by osmosis. The talk was geared towards late physics undergraduate to physics graduate student audiences.

Needless to say, the talk was wonderful and both Terry and I came out of it feeling very stupid.

As the evening wore on, Terry and I spent some time discussing his research work on the process of emancipation for slaves and their transformation into a free people. Very cool work that fascinates me. (If you are interested, I would recommend the talk he gave and recorded entitled Space, Place, and Emancipation.)

What struck me as we talked was that the talk by Marc Sher we had seen and the conversation I was having with Terry both centered around cutting edge research in each of their disciplines. So why was it that I, even with a strong background in physics, was completely lost for the meat of the presentation on the Higgs Boson, yet was able to have what I hope was an interesting, engaging, and possibly even enlightening for Terry conversation on his work?

The simple, stock, bigoted scientist answer to that questions is “Well, physics is harder than anthropology.” That is too easy and full of crap. Knowing Terry and having dated an anthropology major through college, I know that the amount of effort they put into their work and the intellectual rigor of their research is just as challenging as that of any hard science discipline. Given his reading collection, it is clear that Terry’s work relies upon insights, facts, and information gathered by many experts in his field just as my undergraduate work in physics relied upon learning the works of Newton, Maxwell, and Einstein. However, I think it is very true to say that anthropology and other social sciences are much more accessible to the non-expert.

I think the difference comes down to how literally one takes interprets the analogy of “standing on the shoulders of giants.” In the “hard” sciences, I visualize a very tall and thin tower of ideas standing on top of each other. For a layman on the group, the top of the tower is obscured by the clouds; in order to reach the top of the tower (and by analogy understand them), one must climb the whole tower from the ground up. And it is very unlikely for an non-expert to have familiarity with the exact prerequisites of knowledge needed to get to the top.

However, in the social sciences, I visualize it as a much larger building, but broader. The ideas and theories at the cutting edge have required a much broader base of knowledge to get right, but are not so removed from the everyday experiences of others. While it would be necessary for a non-expert to learn just as much to fully understand the experts work, it is sufficient to know only a little to be able to understand the basic concepts.

I think this one of the strengths of the social sciences and challenges that the hard sciences have to overcome. It is much easier to convince someone of the importance of scientific work that they can understand and possibly see applications to in their everyday lives. Explaining why we should do research to back up the existence of the non-zero vacuum expectation spontaneously breaks electroweak gauge symmetry which then gives rise to the Higgs mechanism is a bit harder.