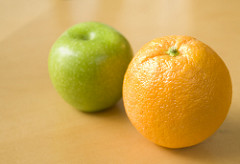 Honesty first, I am a fan of Apple products, I have been for a while and I don’t see that changing. I hope I avoid the fanboy title, but I can’t probably argue too much if it is applied to me. A bad habit I have been indulging in recently could probably be called “Android-baiting.” Tweeting about things like Android OS Fragmentation, Slow Uptake of Ice Cream Sandwich, or the Overabundance of Android Phones. It is all in good fun and I think my Android using (and loving) friends take it in that spirit (I hope so at least).

Recently, a friend responded to a tease by saying “How is the 4G on your iPhone? :)” A valid question that shows a clear technical difference between some of the Android phones and Apple’s iPhones. It is very true to say that as a group, Android handset manufacturers push the technical envelope faster than Apple does.

While I grant that that is a true statement, I don’t really care; it makes no difference to me. That got me thinking; why don’t I care?

I am a geek, have been for years, will probably always be. I build my own servers, I get my enjoyment from upgrading operating systems or setting up IPv6 in my house for no practical purpose. So why don’t I care what specific technology is used in my phone?

As odd as it may sound, I don’t think I categorize my iPhone and iPad in the same mental bucket as my computers.

This morning at about 1am that thought came to me and I think that is the proper distinction for how I look at these devices. Things like computers and servers and networks still fall into the standard geek “I care about what it is” category. Faster CPUs, bigger disks, cooler, more esoteric networks. These are all fun pursuits that I can really get into.

I don’t look at my iPhone and iPad that way. I care what they do for me. My concern is not whether it has Edge, 3G, or 4G or a Dual or Quad core CPU. I just don’t care. What I care about is whether I can effortlessly get my email, or play a game, or read the New York Times. That isn’t to say that the technical specs aren’t relevant, just that they are secondary. They are a means to an end. So, for example, my original iPhone was Edge only. While it worked, it definitely was slow to check email, so the update to the 3G model was a welcome improvement. Will 4G make my email experience better, maybe, but I doubt it will be a informational experience.

I don’t like using the word “appliance” but I think that is the best name for devices that fall into the bucket where “what it does for me” is the criteria for success. Rarely do I see people debate the wattage of microwaves as a buying criteria in and of itself. The question is “how quickly can I defrost the meat?”

I like the fact we are moving this way. When my mother calls about her iPad and I can hear the genuine excitement in her voice, it is not excitement about the fact it has 3G or an A5 processor. It is that she just rented a movie online and it showed up on her device and she enjoyed watching it. Those are the things that matter to most people.